IntraLase is also called”all-laser LASIK” and “bladeless LASIK”. As these names imply, the surgical cutting instrument is not used with this type of LASIK. 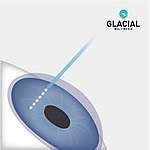 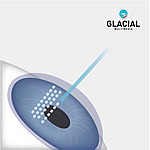 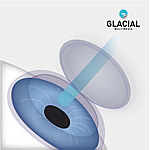 In traditional LASIK a little flap is cut on the eye’s surface with a microkeratome, folded back to expose the next level of tissue, and the laser is directed on the specific areas that need correcting. Then the flap is folded back into position and heals quickly.

Although in some cases the microkeratome is still used, there is a little more risk associated with it. 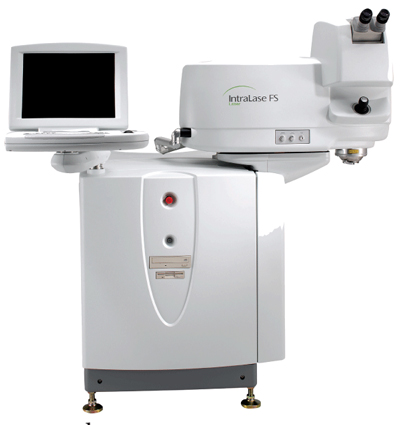 This is an infrared laser (meaning its vibration is below what we can see) and it pulses at the unimaginably high speed of one quadrillionth of a second per pulse. This means that tissue can be separated without surrounding tissue become too hot.

This IntraLase laser, guided by the computer, creates a pattern of unbelievably tiny (3-micron diameter) overlapping spaces below the cornea’s surface, such that a very thin flap is created. As with traditional LASIK, the flap is hinged and the surgeon folds it back to expose the next level of tissue where the excimer laser can do its correctional work.

Q. How is IntraLASIK different from traditional LASIK?

A. LASIK surgery is actually a 2 step process. First, a flap of corneal tissue must be created and then folded back. The cornea is the transparent dome-like structure that covers the iris and pupil of your eye. By creating a flap in the cornea, the surgeon is able to perform the laser vision correction treatment on the inner layer of the cornea, which practically eliminates any patient discomfort and allows for a rapid visual recovery.

Traditionally, the surgeon created the corneal flap with a hand-held mechanical device which utilizes a metal blade. This method has worked well over the years; however, the performance of these devices can be unpredictable. And although LASIK complications are rare, this mechanical device is frequently the source for many of the reported complications.

With IntraLASIK, the surgeon uses the precision of a laser to create the corneal flap. The accuracy of the laser (± 10 microns) is unparalleled by any other technology in vision correction surgery. This advanced technology puts unprecedented control in the hands of the surgeon, and even allows him to customize the corneal flap for every individual patient. Because of its consistent accuracy, IntraLASIK now makes it possible to treat many patients who were dismissed as candidates for laser vision correction due to thin corneas.

A. IntraLASIK is considered by many to provide a safer approach to vision correction surgery. This is a result of the superior precision of a computer-controlled laser as compared to that of a hand-held mechanical device. The mechanical device houses a metal blade that cuts across the cornea to create the flap. IntraLASIK accomplishes the flap procedure with a laser instead of a blade, and does not travel across the cornea; these features reduce the risk of complications.

IntraLASIK provides a safer procedure because of its precision. This precision was documented in studies conducted for the FDA clearance of the laser, where the accuracy of flap thickness was demonstrated at +/- 10 microns. Precise flap thickness is critical to a successful LASIK outcome, and IntraLASIK created flaps feature a consistent thickness from edge to edge. Again, this degree of accuracy is unprecedented in flap creation technology to date.

Finally, greater flap stability was also demonstrated with IntraLASIK flaps in studies for the laser’s FDA submission. Although the incidence of flap slippage is rare in LASIK, the consequences can be quite problematic, the assurance that the IntraLASIK created flap will be securely re-positioned without incident provides added peace of mind for many patients.

A. No, but IntraLASIK seems to reduce the risk of complications reported with traditional LASIK, and we feel that is very important for our patients.

Q. Is IntraLASIK new? How is Dr. Berg able to offer IntraLASIK when others in the area do not?

A. The INTRALASE™ FS Laser has been cleared by the FDA and became commercially available on a limited basis in 2001. The INTRALASE FS Laser is the only laser that provides IntraLASIK. To date, over 60,000 procedures have been completed with no significant complications reported. Dr. Berg is among an elite group of key opinion leaders in ophthalmology who continually evaluate technologies and adopt them into practice as soon as they become available.

Q. How would you compare the visual outcomes using IntraLASIK with those of traditional LASIK?

A. Today it is known that visual outcomes with IntraLASIK are comparable with those of traditional LASIK. Studies are now underway to evaluate whether results with IntraLASIK might be even better, as has been anecdotally reported.

Q. I have seen several advertisements for 'All Laser LASIK.' Is this IntraLASIK?

A. Be sure to ask for IntraLASIK by name. Only IntraLASIK offers the safety of micron-level precision of a truly all-laser surgical approach. Other providers may advertise all-laser, but you should ensure that IntraLASIK is indeed being used to create your flap. Your surgical provider should be happy to answer any questions you may have about your procedure in great detail.

Q. A very close friend had traditional LASIK surgery with Dr. Berg, and today enjoys a 20/20 vision. Why should I pay more for IntraLASIK?

A. Because we feel this is a very compelling technology that significantly raises the standard for safety in vision correction surgery, we are recommending IntraLASIK for all of our patients. You should discuss your concerns directly with Dr. Berg as certain vision disorders and corneal anatomy may be associated with a higher degree of risk. Dr. Berg will help you to decide which is best for you.

A. Advanced technologies are usually more expensive for the surgeon to employ in his practice. Most patients agree that the added level of safety and assurance offered by IntraLASIK is well worth the additional cost when considering vision correction surgery.

Use of the IntraLase laser opens the door wider for more people to enter the LASIK world. Previously, there was a limit set by the cornea’s thickness. In some people, the cornea surface was not thick enough for a flap to be safely cut.

But the IntraLase laser can make that little flap as thin as 100 microns, so people with thinner or flatter corneas can now benefit from laser eye surgery.

Don’t settle for mediocre LASIK. Trust your eyes to the LASIK leaders with a commitment to technology. Contact Berg·Feinfield Vision Correction today for your personal and complimentary eye care consultation.